The trend of reboots, remasters, remakes, rehashes that has plagued the movie and music industry for many years seem to be just as unstoppable in the little world of video games. I am always a little torn by this.

Oh, I’m not even thinking twice when it comes to movies and music: more often than not the duplicates are so bad they are borderline evil (the new Robocop! Oh my god…) as they taint the original premise of older, greater, more thoughtful movies.

However, when it comes down to games, it pays to be a little more pragmatic. After all, games are by nature constrained by technical/hardware/software limitations, and a new version using more recent technologies can bring new life to something that nobody would want to play anymore otherwise, just because it looks or feel too dated.

As usual, there are good and bad practices. I am less inclined to see the “HD Remasters” cash-grabs in a positive light, such as Shadow of the Colossus for PS3 that was basically a poor step up compared to the original game. Day of the tentacle Remastered, however, serves as an honorable reminder that remasters can be done right: not just better anti-aliased graphics, but properly redone artwork, improved sound effects, and added developer commentary as an icing on the cake.

And then there’s Wonderboy 3. It’s unusual to find remakes of something that old, since it’s basically a reboot of an old Sega Master System game – the prehistorical 8bit era.

It does not take longer than a blink of an eye to grasp that a LOT of work went into this reboot.

It’s not a slight improvement of graphics, it’s a whole redesign, using the original game as a blueprint or prototype. Landscapes, backgrounds, barely suggested on the 8 bit version, get a glorious rendition in this reboot. What’s really interesting, though, is that the original level design was kept 100% intact.

More impressive is this feature that lets you switch back and forth anytime between the 8bit version and the modern one, at the press of a button. If feels like dark magic. The game is basically running an emulator of the 8 bit version in the background, at the same time as the reboot, and every single of your movements in either version is accurately reproduced – so no matter which version you decide to play, it plays exactly the same. This is not a simple feat, and it’s not a surprise that Omar Cornut, author of the excellent Mekka Sega Master System emulator, is behind the technology used in this game.

Note that while the game is supposed to “feel” identical, the graphics upgrade changes the way you experience the game – even in terms of controls. The more beautiful animations give a feeling of smoothness that the simple sprites of the 8 bit version lack.

Tech wise, the reboot looks like a 2D game but there’s actually a bunch of 3D elements in the background, giving a great sense of grandeur and distance to the environment. The artwork and animation is absolutely fantastic: superb hand drawn sprites from the guys at LizardCube. The artists deserve to be recognized here: the style of all heroes and monsters is very consistent from end to end, mimicking and re-imagining the graphics from the 8bit title, most of the time in a very faithful way. Here’s a video showing a clear comparison:

But since Wonderboy III is a carbon copy of an 8bit game, did the gameplay age at all? Is it still fun to play in 2017? In a word, yes. The original game was actually very well designed for its time. You start by playing your typical prince, on its way to defeat a dragon at the beginning of the game. After a quick fight, you emerge victorious, until you discover you are victim of a curse: the dragon has changed your appearance in that of a dragon as well, and you need to continue your quest to get back to your original human form.

Through the various levels you end up fighting other bosses and each time, the curse turns you into a different shape: a mouse, an aquatic creature, and so on… each with different abilities. The mouse can climb certain walls, making it possible for you to access new areas there were out of your reach initially. It does feel a little bit like a Metroidvania game, well before its time. There is certainly not as much exploration or back and forth needed, but you can go and explore around, if you wish to level up your character or simply discover new passages and secrets. 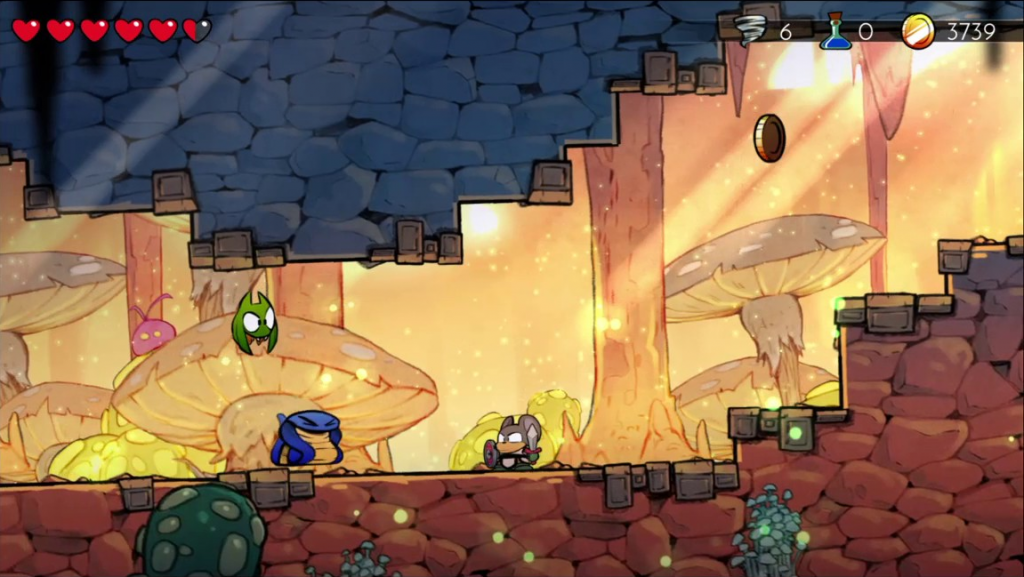 Wonderboy III’s overall level layout is very well designed. After each transformation you understand where you could go next, thanks to your new abilities, to find your next goal. Nobody is holding your hand though. Gamers who are used to blinking arrows and clear maps may find themselves lost sometimes, but that is also what the reboot is for: to make you experience what a 8 bit game was like.

While it never gets really boring, walking across levels can become a little repetitive, especially if you die a few times and have to go back through the same path again and again (no checkpoints!). You don’t really have lives so you can always restart your progression and you can only blame yourself if you give up. On top of that, things get easier even if you need to restart several times, because you never lose any of your earned cash. So as you accumulate credits, you unlock new upgrades to do more damage or to get a larger life bar. This way Wonderboy III remains somewhat difficult, but not impossible to beat as long as you put the time in it. 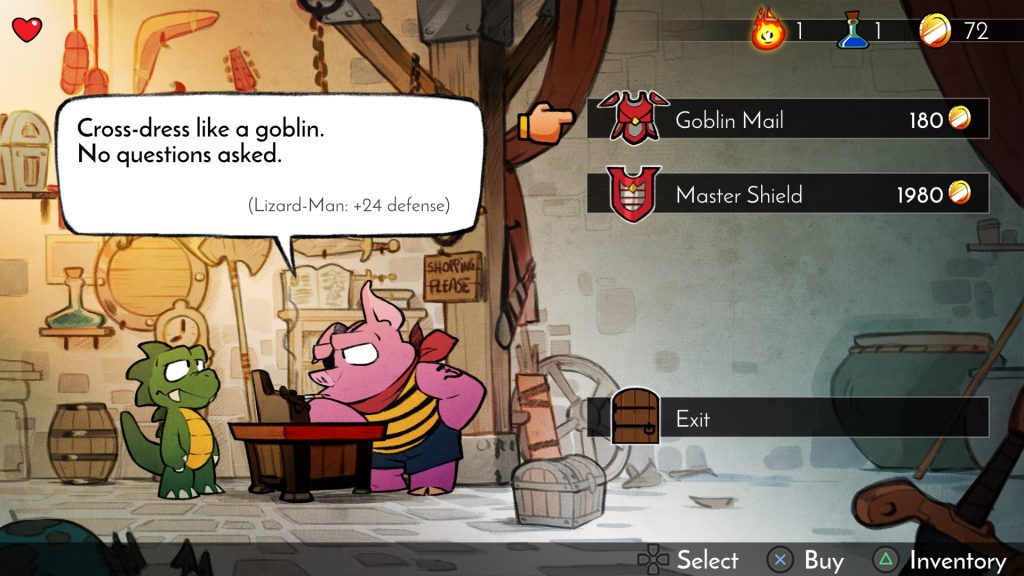 Not everything is perfect, and the key disappointment comes from boss fights. They are quite dull (there’s only a single pattern to remember: hit them on the head) and it’s just a matter of executing the right move at the right time a dozen times or so. And well, most 8 bit games were like that at the time, and that is why Megaman was so popular: it had pretty entertaining and out of the ordinary boss fights! 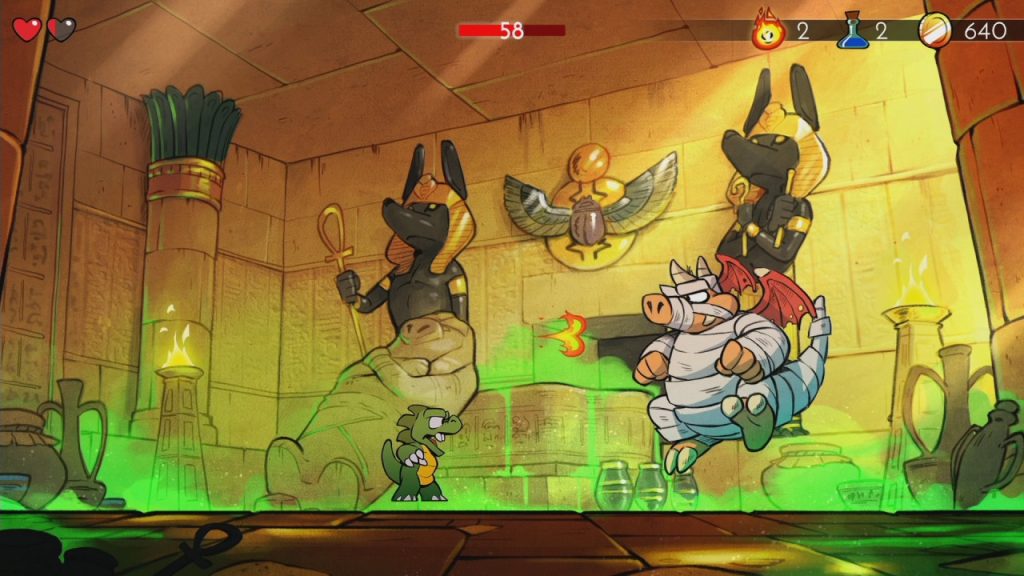 Wonderboy III is, all in all, very nice and a good example of how 2D-style games can still deliver even in 2017. They aren’t obsolete at all.

Oh, and the port? Well, if I did not mention anything at all, it’s simply because it runs completely as expected, without hitch. We talked with Omar and Ethan a few weeks back about the port of Wonderboy III, in case you missed our prior article. I complained to Ethan Lee when his beta was out that it was doing a black screen on my Intel HD 3000-equipped laptop, and lo and behold, he fixed it and made it compatible with that hardware as well (beyond the system requirements!). That is just awesome – thanks Ethan! Controller support is perfect, too. and the Steam Controller is properly recognized from the get go, so playing on the couch is a pleasure. The only minor issue, and I am not even sure if it’s really a technical issue or a design decision, is the slight jerkiness of the scrolling when you suddenly change direction (going from left to right or vice-versa). This is happening even on my Nvidia GTX-970 box, so this is probably not a performance issue. And maybe, this is just me. If you have the game and notice something like that too, please leave a comment.

Is that All? No – just one addition: after the recent Road Redemption, Wonderboy III is joining the highly envied recommended games list as well. You can grab it on Steam, on GOG, on the Humble Bundle, but beware: only GOG has a DRM-Free version (Humble Bundle does NOT even mention the Linux or Mac version! it should work anyway but it is quite odd that they did not update it).

I had never played the original but the remaster looks good. Glad to see a DRM free version as that’s the one i’ll be going for. I don’t mind reboots or remasters as well if there is a good reason for it but sadly many times it’s not needed or done as a cash in.