While it was certainly looking like a scam at some point (accepting money, with no prototype at all, and uber-optimistic hardware delivery timelines), it looks like the Smach Z project is making some serious progress. They have announced the final specs, based on a AMD Ryzen Embedded V1605B chip (Ryzen/Vega). You get the following characteristics from that choice:

We also get some pictures from the current boards:

The first one is about the main board hosting the AMD chip, along with the RAM and the big fan to keep things cool. 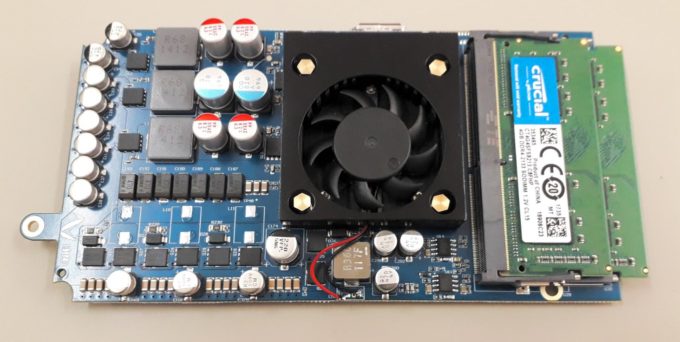 The second board is to connect all the peripherals such as the Steam Controller-like pads, buttons, USB connectors, microphones and so on.

Don’t expect any release date at this stage neither a unit price. There is still a long way to go, and many opportunities for the project to still fail later down the road. Hardware projects take time and require large investments especially when moving to actual production runs. We will keep following their updates.

Impressive looking, (Ryzen is a HUGE jump over Construction or Cat cores!) although if I were to bikeshed, I’d say they could ditch expandable memory. While nice to have, they *really* don’t have a lot of space work in, and soldered memory could be much lower power, also a concern with this form factor.

Yeah, it’s true they certainly don’t need the expandable memory. It’s possible that it’s only showing up at the prototype stage and it won’t be like that if they ever come close to making full production runs. I’m also wondering how they plan to fit all this into a compact format, especially since the battery is apparently going to be of high capacity…

The World of Linux Handhelds in 2018 – Giant Pockets

[…] several milestones since the start of their crowdfunding campaign. They have recently disclosed that they will use an AMD chip (Ryzen/Vega V1605B) which will bring full compatibility with x86 games (i.e. the world of PC […]

If you relove the gpu fans and use delta fans to blow air at high tdp cards, does it cool well? Serious question from prospective buyer 🙂

Gabe admits "We made mistakes... (goes on a list and the first is...) We did Steam Machines..." Well at least they are clearly awa [More...]

"Brain-Computer Interface is an extinction level event for all other forms of entertainment" - Gaben in this interview: https://ww [More...]

Gaben interviewed after the release of Half Life Alyx. Always interesting to hear him talk about the future and the mindset of Valve devs. h [More...]