At first, you’d mistake this game for the first episode. The same thing With a female robot in the leading role this time around. And you would be forgiven to think so: It certainly looks and feels very similar at the beginning. But very soon, you will figure out there’s much more to it.

I liked the first Steamworld Dig very much. It was certainly not a hugely impressive game, but it was pretty well designed, simple but with a good focus on exploration and mining. While I am usually not a fan of open world games, I found myself coming back to it regularly, because there’s always the attraction of what lies further below, as you dig deeper and deeper, with secret rooms, creatures and what not. 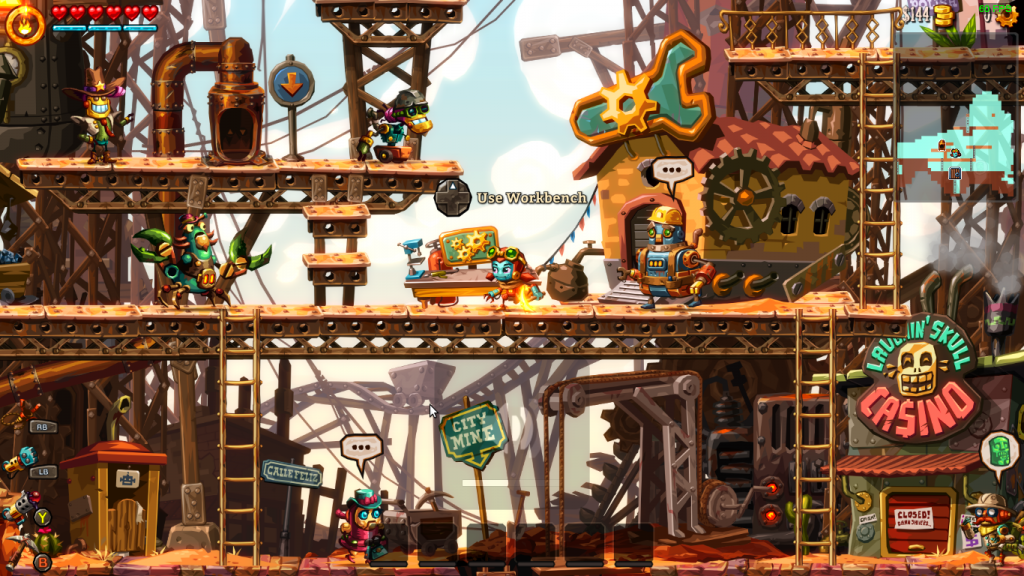 Since the first episode was released, Steamworld has become a “franchise”. Just like McDonalds, except that this franchise does not suck. They serve quality food instead! The same team released Steamworld Heist in 2016, leaving the ground to aim for space. Steamworld Heist is actually a very good game as well. It falls in a completely different genre, the 2D turn-based tactics, and I need to write about it one of these days. It deserves praise on its own.

Let’s go back to Earth, or rather, earth. Steamworld Dig, first episode, was not a perfect game. Don’t get me wrong, it was pretty fun and well designed, but it encouraged some level of grinding and felt a little repetitive at times, no matter how pleasant it was to play. Sometimes it took quite a while to unlock some required items, and that did not feel really necessary. 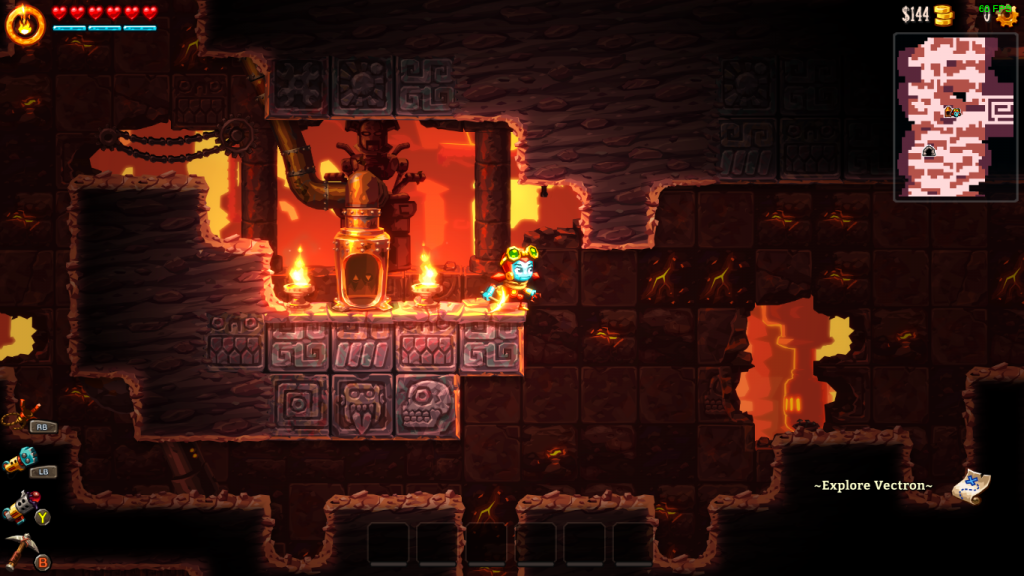 Steamworld Dig 2 fixes basically most of the issues I had with the first episode. First, there’s a clear storyline this time around: you, as Dorothy, are looking for Rusty, the hero of the first episode, who is nowhere to be found. Your path has led you to a new mine that’s been closed because of recurring earthquakes, making mining dangerous. Soon you start wondering if the absence of Rusty and these recurring earthquakes are not linked together in some way…

You also get to free very early in the prologue, a little blue flame-spirit companion, who knows a lot more than they are willing to say. In many ways, this character reminds me lot of Morte in Planescape Torment: never losing a chance for sarcasm. 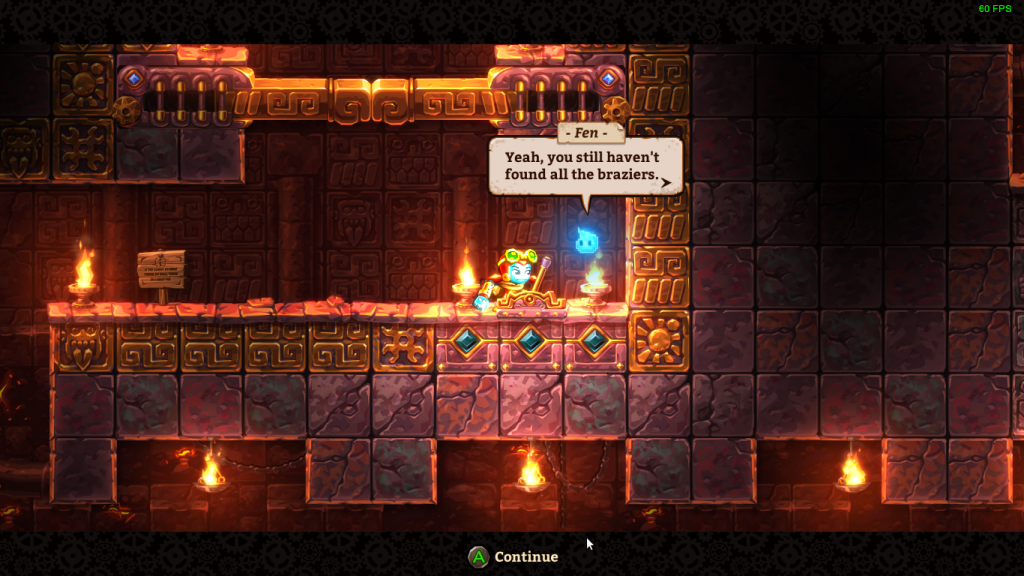 It’s not just the storyline that has improved: there are now clear goals to pursue one after another. And they lead you to move around a lot, in different areas, outside of the first mine. In Steamworld Dig, you could spend hours in the same spot, digging further down. Now in Steamworld Dig 2, the exploration goes both ways, vertically and horizontally. This is refreshing, since you feel there’s a progression, a path forward and not just downwards… so to speak. At the same time it feels like hand-holding a little bit, but there’s never something forcing you to go to the next goal immediately. If you prefer spending time digging more and upgrading your gear, it’s always possible. They have reached a good balance to let the player decide what they want to do next: a clear path with objectives, or more open-world digging if they want to.

I was also impressed by how fast you unlock upgrades in Steamworld Dig 2: in a matter of hours, you will own most of tools you will need to progress. New items like the grappling make it much easier to move around and go back up after falling. They can act as weapons as well instead of using your other tools. There’s also the pneumatic drill using water, very effective at digging really fast in the ground. You’ll have to find sources of water to use it continuously, and there are not many around.

Exploring the depths will make you reach very different areas… one of them was a nice surprise: full of luminescent mushrooms. That’s when you really notice the work with the shaders on the environmental light really pays off. 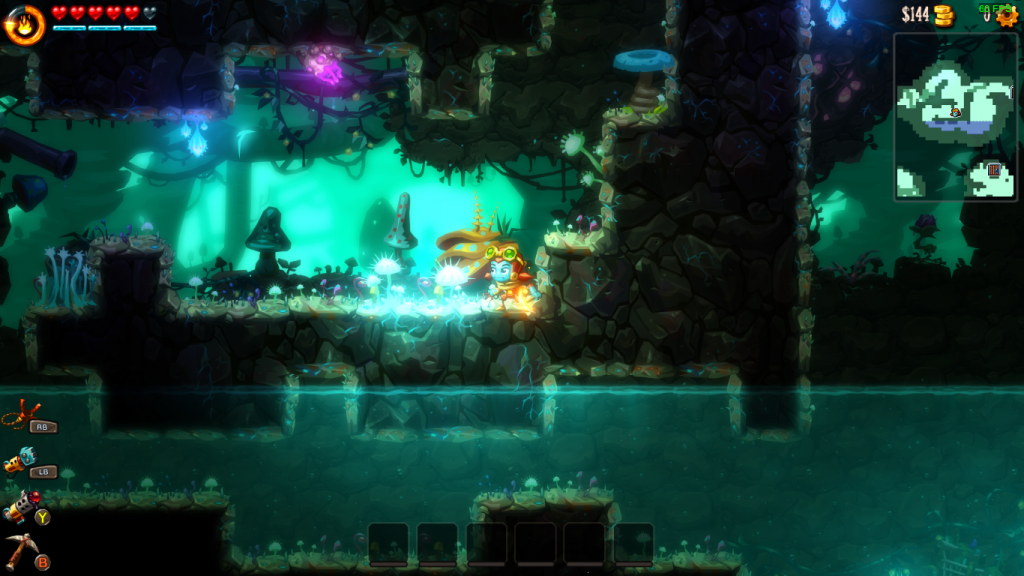 The path will lead you through a stone temple as well, guarded by huge metallic robots… slowly unveiling the mysteries of Rusty’s disappearance one by one.

With such additions, the advent of level bosses in Steamworld Dig 2 feels very natural. That’s where you realize how different this game is from the first one. The gameplay in the first game was way too slow to allow for the kind of rapid action required for boss fights. It’s day and night in that regard – one of the first boss fights requires you to use your grappling and your digging tools to reach the enemy that teleports themselves from one spot to the next. The longer you wait, the more perilous as the environment gets progressively destroyed and you are just above a pit of lava! A stressful boss fight, to say the least.

Overall the best thing I have to say about Steamworld Dig 2 is that, I did not get bored, and I still want to continue the adventure and the exploration. 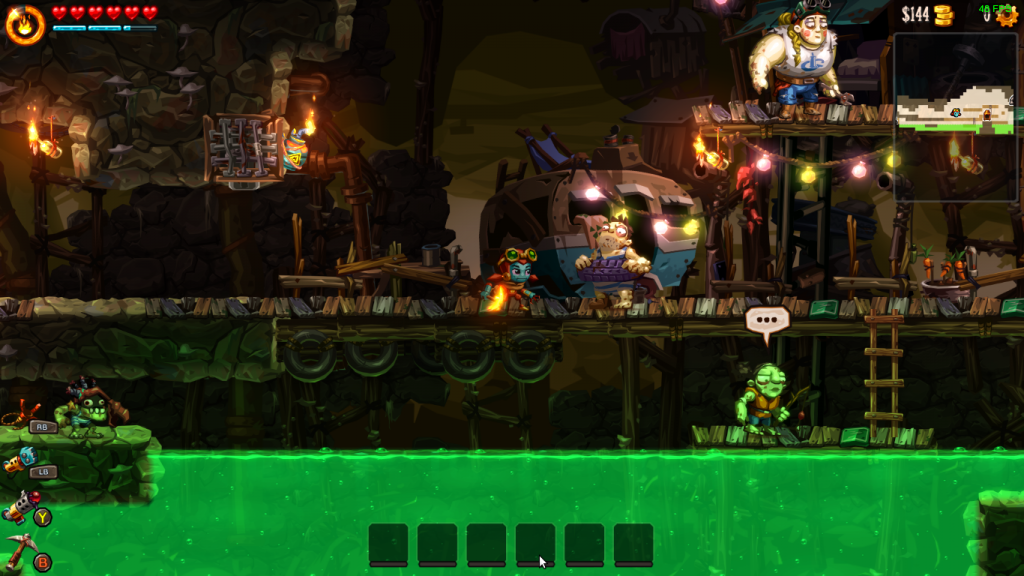 While all improvements are welcome, there is still some things worth nitpicking about. You are always digging alone. Just like in the first episode, all the NPC you meet are completely static. You never get to meet someone digging at the same time as you (apart from bosses). Such aspects make the world feel a little inert.

It would have been great to make the environment in Steamworld Dig 2 more dynamic. Let’s say, have a few more digging bots around, chasing gems on their own. That would have motivated you to dig faster and better to grab them first! The game would have had to be designed quite differently for it to work, but that’s something they could consider if they continue the series. It’s also a little weird that when you are destroyed, you get back in town in one piece, because “someone brought you back and fixed you”… like, who brought you back, since nobody is ever seen digging around?

By the way, before I let you go back to your daily activities, I have been in touch with Brjann Sigurgeirsson, CEO of Image & Form, the devs behind the Steamworld Universe, based in Sweden. Linux has been a day 1 platform for their recent titles, including Steamworld Dig 2, and I was wondering what was their motivation to support the platform.

Brjann: I think Linux is important and will never go away, Linux users are too partisan for that. 🙂 It’s of course not the biggest of platforms, but our Linux sales figures are significant. It can be a case of “build it and they will come”: if you consistently provide Linux versions of your games, Linux gamers will count you as one of their own.

Now, if you were wondering if Linux also happens to be their development platform…

Brjann: For the sake of consistency we use Windows as our development platform. We use our own build server and test on a number of Linux PCs before release. A number of our programmers prefer Linux on their non-dev machines, but mixing OS environments is generally not a great idea. A few of the devs used Mac and were happy that way, but we streamlined the process and saved a lot of time and effort. Needless to say, all the Mac users wanted everyone else to switch to Mac, but… 😉

Too bad for Linux not being the dev platform of choice, but having some of their devs using Linux on their non-dev machines is a great sign to ensure quality builds. That’s probably why I have not encountered a single issue with the game, despite trying it on several distributions and GPUs (Intel Graphics and nVIDIA). On top of that, it plays perfectly with a Steam Controller (recognized from the get go) as well as keyboards (laptop gaming for the win!). Always great to see no-nonsense mappings. Note that the game will run well even on low-specs laptops. I wish more games realized the potential in terms of user base once you get it fast enough to run on about everything – it makes them easier to port to other platforms, too.

You can grab it on Steam, GOG and on the Humble Bundle Store. Note that only GOG has a DRM-free version this time around (the first Steamworld Dig is DRM-Free on both GOG and HB).

Since Steamworld Dig 2 is a pretty good title, it finds its way into our recommended games list! Next, I will come back on Steamworld Heist, in the course of January.

Note: all screenshots from this article come from the Linux version of the game.

As a developer working on C++ cross-platform software myself, Windows and Visual Studio was always the best environment to actually write the software. Say about Microsoft whatever you want, Visual Studio is still by far the best C++ IDE available. Not only the IDE itself, but also the numerous add-ons (Visual Assist X, ReSharper, Atomineer etc.) add a lot of comfort. For Linux, the choices are limited (KDevelop, NetBeans, CLion and recently Visual Studio Code for the early adopters) and they all feel incomplete in many places, are slow or crash too frequently. I use Linux exclusively at home and… Read more »

I enjoyed the first Steamworld Dig until the point where I fell into some metal room (as far as I remember) and got stuck for a reason I forgot. Maybe I should try again.

Your mention of stressful boss fights does not make me want to play the second one! (It’s a good thing since I already have hundreds of games in my backlog.)