A few days ago I received my own Steam Controller (because of limited availability I had to order it through another country to get my hands on it…) and just one day later Valve released a video of their assembly process of the said controller, apparently more or less fully automated. Most of you may have already seen the video, but I thought there are some interesting things to say about it beyond the simple contemplation.

First, the assembly takes place in Buffalo Grove, Illinois – a small city of 41 000 inhabitants. Fun fact, this is where the actor Vince Vaughn grew up. It’s pretty far from the headquarters of Valve (Bellevue, next to Seattle, which is very close to Redmond, also known as Microsoft-city). I am guessing that Valve either bought the space there in Illinois, or more likely manufactures it through/with a partner company based there – I could find several such companies in the area. Anyway, Valve claims it has designed the whole manufacturing process (again I’m not sure where the line is drawn between Valve and their partners, I am guessing they needed external engineers to help with the machine’s creation, you don’t develop that kind of knowledge/skills out of thin air). In terms of facility, it’s honestly not that large as you can see from the picture… But actually this picture is misleading since it only shows one part of the assembly. You can see later in the video another angle, and it’s very clear the assembly continues BEYOND the layout in the first pic. Another shot in the video displays a different angle as well from the other side of the facility: A closer look at the pictures reveal the actual supplier and potential designer of the machinery:

Valve, instead of trying to get all the credit for yourselves, you could have mentioned your partner… The assembly apparently starts from the trackpads, which are already available on trays right from the start. This makes it easy for the robots to pick them up. The trackpads need to be attached to a little printed circuit, such as the following… This is actually what you see when you disassemble the Steam Controller: the flexible attachment between the main board and the trackpads:

A machine puts the brown circuitry together with the trackpad so that they are aligned properly and connected on the trackpad interface: And then the brown circuit is directly soldered on the trackpads by a robot. And this is consistent with the fact that the mould are obviously made of metal (in order to be used and reused millions of times if needed) – and this is the front of the mould: And it seems very logical to see the controller shell positioned on that mould before being picked up by another robot – and by the way, it seems like the mould creates 4 controller shells at once. I think this may be why Valve can claim to have one of the longest, fully automated assembly lines: in my experience injection moulding is something that is usually done by a separate supplier in a different factory before being shipped for final assembly in a different location. Having that step included in the very same chain would be rather rare. The shell is then taken to a different place where another robot inserts one by one the coloured action buttons in the appropriate slots: The last piece for that side of the controller consists in the fixation of the button board at the back of the action buttons, to ensure they can be pressed. This little board is a very classical design used in controllers, to put pressure on specific points of the main board to trigger click events via switches. In the meantime, on another part of the assembly chain, the other side of the controller (the bottom shell with the main board) has already been assembled (the video does not show any of that), and the analogue pad is taken by another machine… … to be positioned on the said board. The analog pad mechanism is already there and the robot simply ensures the shell of the pad goes right on the little joystick, via a very elegant movement. You can see that at that particular stage, the shoulder buttons are already fixed on the main board – again that operation is not shown in Valve’s video. Then comes the final operation of the assembly, led by Aperture-labelled machines (a reference to Portal). This operation assembles both parts of the shell to form a single controller: The assembled controller is then tested for defects (I think), as two “fingers” come on the surface of each trackpad to ensure they are positioned correctly. If a defect is detected they would be rejected from the line before packaging. The same goes for the analog controller, tested for rotation: The controllers are then placed into a white plastic container and up they go to the packaging part of the chain. Note that many parts of the video are actually accelerated so it looks that things go really fast, when they actually don’t. The throughput seems to be something like one controller every 2 seconds or so, which would make something like a little less than 2000 controllers per hour of shift. It may sound like a lot, but it is really a very small production scale compared to usual consumer goods that can be produced in the hundreds of thousands of units per shift. Another machine pushes flat cartons into their proper shape so that they can welcome the long-awaited controller. The last part of the chain has two main robots: the yellow arm on the right is fixing some of the inserts in the final carton box, coming from three different feeders (providing accessories and the manual) before the controller is positioned by other yellow arm in the middle of the picture. Finally, as the boxes go through the left, they are closed by another side decide putting the cover on top of the box. 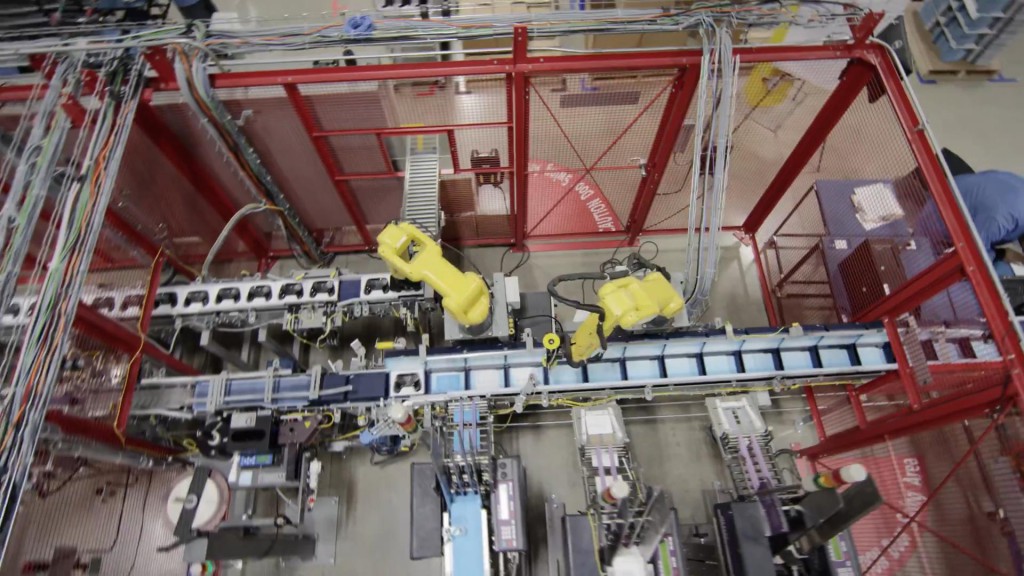 Controllers are then put into shipper cartons, and those are put together on palettes for final shipment. One thing that we don’t know is whether these palettes are shipped somewhere else for storage before they are shipped to their final customers… or simply stored near the assembly line and shipped from there.

Here’s the full video below.

If you know of any other detail concerning the assembly process, please let us know in the comments!

It is a simpler product to assemble, so the controller is definitely the sexier video to produce. Assembly system is quite similar, since the Doerfer (who is now part of JR Automation) designed and built both the assembly lines for Steam Link and Steam Controller. The stations being installed just before Flexicell’s packaging line obstructs the view of them at 0:19. The closer station is the assembly station and includes three large tray handlers, a vibratory feeder bowl, and 4 screwdrivers. Two small stations beyond that laser etch the markings on the bottom and place the rubber pad. The next… Read more »

In 014, I was Control Engineer and Designer of some station such as; three large tray handlers, vibratory feeder bowl, and a lot of small stations. One of the best project that I did in my career

Hi Al, do you mean you worked on this assembly line, or something that looked a little like this one?

In Other News as June Begins – Boiling Steam

[…] – remember back in December when they released their video about their manufacturing process, I mentioned they were probably producing 2000 units per hour of shift, so selling about 2500 days means they have been stocking up on a while without having to produce […]

What kind of bug are you referring to ?