INSIDE. Inside what, exactly? That’s the pitch of the game. To discover the meaning of it all!

INSIDE is the last creation from the developers behind Limbo (which ended up getting a Linux client, ported by Ryan Gordon). And honestly you can’t miss the parallels between the two games if you played both. In each you control a child, lost in gigantic and oppressive environments. Both games have a very dark visual style, monochromatic for Limbo and pretty much in shades of gray for INSIDE. It involves the same 2D mechanics and minimalist controls: one button to interact with objects, and the gamepad directions to move around and jump. Both feel very pessimistic and involve elements of mind control, death and despair. Both tell a story without any dialog or any text: you just progress from left to right, and grasp somehow what is happening just as you explore the world. And I think I don’t want to play any of them more than once, while I really enjoyed them both. 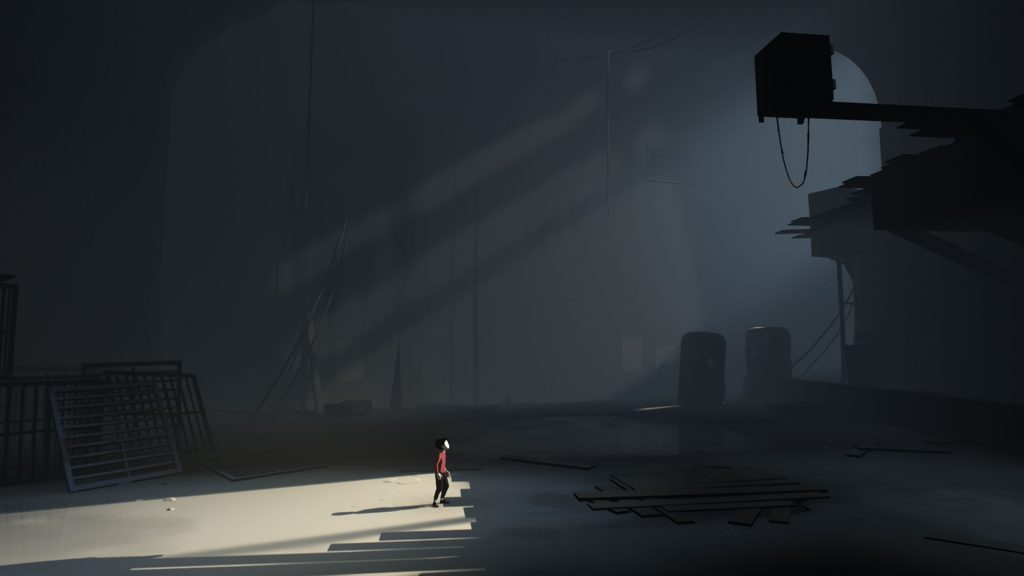 I guess the main difference between Limbo and INSIDE is that INSIDE has a deeper, richer world to it. INSIDE tells a story where humans are treated as cattle, brainwashed and imprisoned after losing all will of their own. Why and how it happened is somewhat mysterious. The boy you control is on the run, trying to escape those behind this sad state of affairs. The whole genius of it is that nothing is every told you directly: you will get to understand most of it piece by piece as you evolve across buildings and landscapes. I don’t want to spoil any of the story further, but know that INSIDE has some seriously frightening scenes. Most of the game will make you feel tense anyway (well, I was always playing it late at night in the dark, so I guess it did not help), but some tricks the devs play on you are very, very powerful. I can still remember vividly at least 3-4 scenes that scared the hell out of me. PlayDead know their stuff, that’s not even a matter of debate.

Just like in Limbo, you progress by trial and error: you will die many, many times before getting things right. And at some point, it feels like you could almost get to pass if you just run fast enough, or just jump at the right place at the right time, but somehow you fall short no matter how many times you try. This is when you realize that you have to try a completely different approach. That’s a good example of “out of the box” thinking the game forces on you, instead of letting you get good at doing the same thing all the time. I really like that stance of making the gamer feel threatened and vulnerable when they least expect it. It’s smart, and not always obvious at first. So yeah, you will die A LOT. You will get used to it. 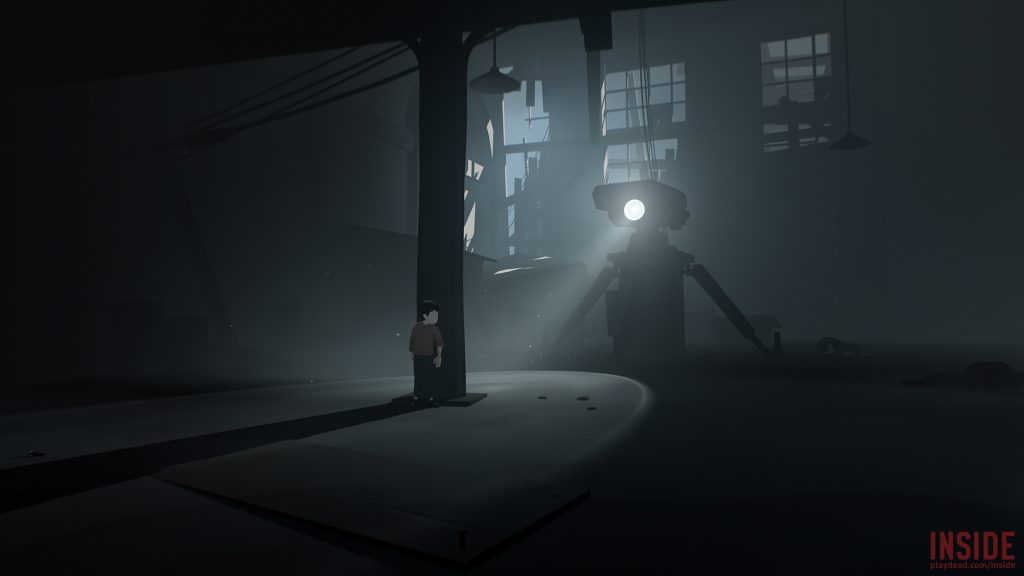 And you will not given up. Because you will always have in the back of your head “what the hell is happening here? Where is this game headed?”. Curiosity will make you progress sooner or later. And it’s hardly a chore: you get to enjoy on the way the absolutely stellar work done by the graphic artists and level designers. It’s difficult to express how well done everything is, and how just “right” it feels down to the bone. At some stage, you will lead a small troop of a dozen humans of different sizes and weights: as they run to follow you, every single one of them moves in a slightly different way. Some hunching, some running with a limb. Seing them run together feel surreal and absolutely gorgeous, compared to hundreds of games out there which just copy-paste animations from one character to the next. And it’s not just characters: INSIDE plays a lot with the foreground and background action. It helps of course to showcase absolutely giganormous structures around you, to give a real sense of space and depth. It is probably overused, though, but more on that later. INSIDE relies on sound too, to create a suitable atmosphere, only when needed. No background soundtrack here, just some subtle notes and effects to emphasize what is happening on screen at some very specific times. 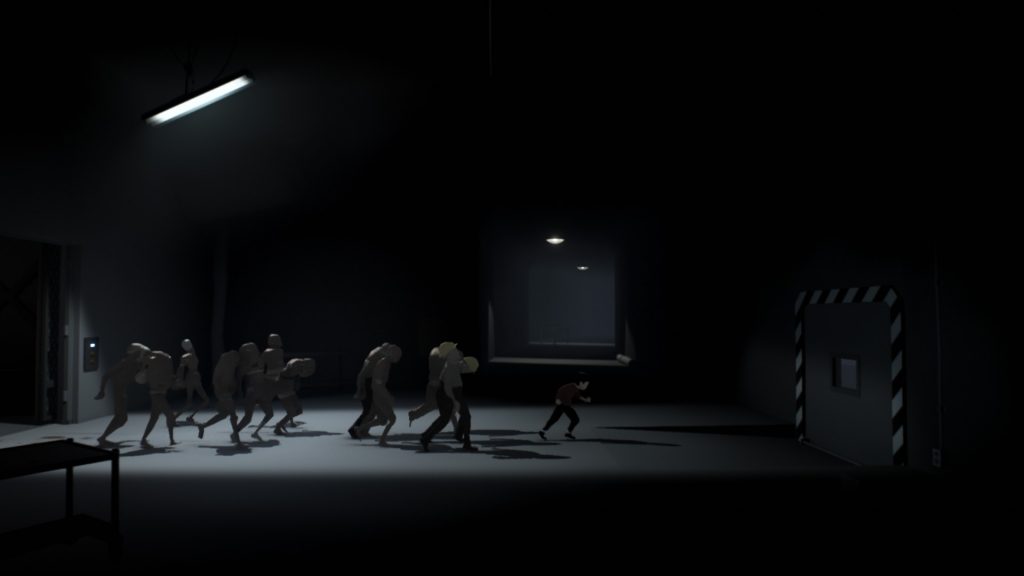 The more I played through it, the more it felt like I was playing Another World (aka Out Of This World) like in 1991 when I first discovered it. INSIDE is really the grand-child of that game. It’s way, way longer of course — you can go through Another World in 40 minutes or so, while it takes about 3-4 hours to finish INSIDE. But it’s still strikingly similar, even in the graphical style, using polygon-like elements rather than very detailed features. This is a good approach that works well to describe a world without having to fall into hyper-realism. And it looks miles better than the crappy pixel art that’s rampant among indie games. It’s distinctive, stylistic and very effective in this context.

While INSIDE is magnificent in many ways, it suffers from a lack of cohesion. It suffers a lot from patch-work syndrome. Individual areas/scenes stand very well on their own, but how you transition from one to another can feel very artificial, forced, unnatural. It’s like they nailed the little things but kind of missed the overarching structure between the different scenes. You don’t notice it as much as your brain is constantly on alert. but after a while you’ll pause and start wondering how it can make sense to go from one part to the next. 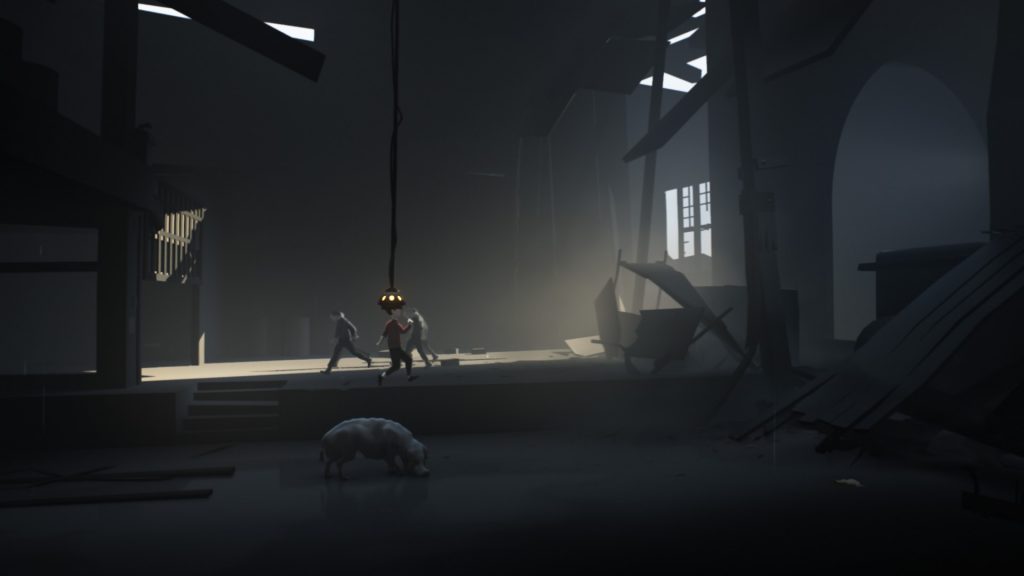 Also, while I am a big fan of their visual work, there is an obvious abuse of gigantism in the game. Everything building and structure looks like it’s several kilometers high. I get it, they want to suggest the oppression of individuals also in the architecture, soviet-style, making everyone looks like termites. But it’s going a little overboard. A clear contrast between smaller environments and larger open landscapes may have worked better, I don’t know. You should not overdo things for effect.

Most of the action from one scene to the next is to solve puzzles. They are all relatively easy and consist in executing actions in the right order. Yet not all of them are as subtle as they should be. In some parts, puzzles fit very well in the environment and hide in plain sight, seamlessly in the world of the game. Some others look completely “made-up”: puzzles for the sake of puzzles, that have no good reason to be there in the first place if you think about it. This is when the illusion breaks, and this is when that’s bad design, and it happens several times throughout. Nothing major, and you probably won’t care as much as I do. 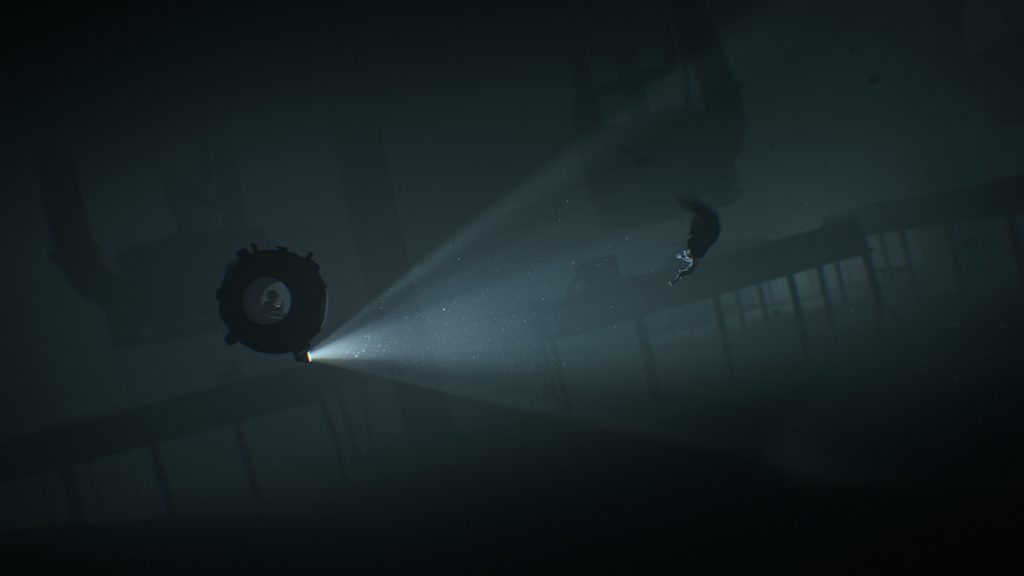 INSIDE has a good thing going in terms of pace: you never get bored. So you keep going forward, and you’ll finish the game in no time. Just a few hours anyway. However, the ending is unsatisfactory. It felt a lot like developers throwing their hands up in the air “Oh F*ck it! We have no idea how to end this! Let’s find some cheap way out and let the audience ponder for years what we really meant by it, 2001 Space Odyssey style!”. I think Limbo’s ending made more sense and fit better in its whole story arc: it felt like closure. I can’t say the same thing for INSIDE. Despite that, going thru the whole thing was fun. That’s probably what matters most. 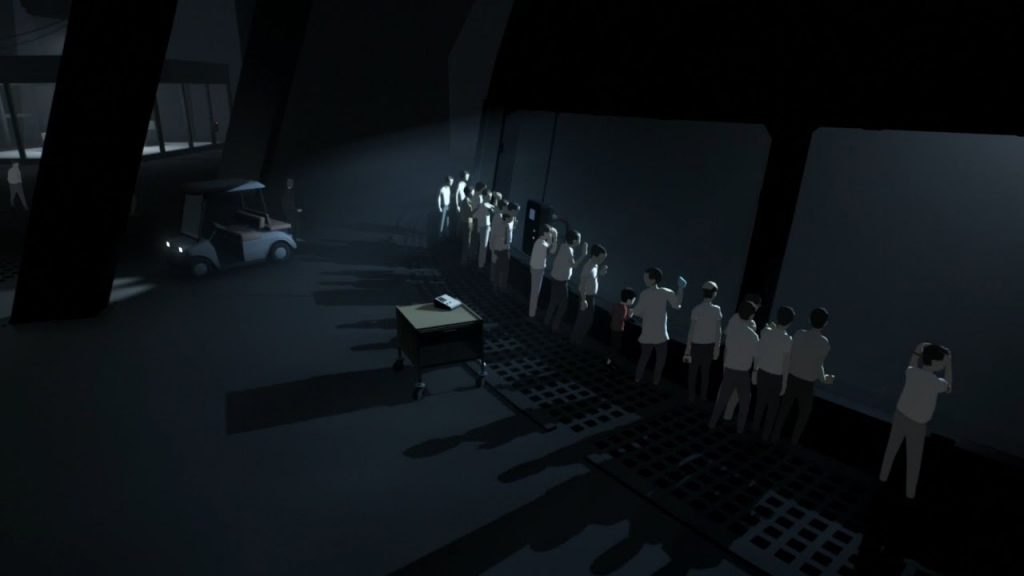 So, how did the game run on Linux? I started playing it on the previous beta of Steam Play/Proton (3.7 or something) and at that stage controllers were not recognized. I managed to play it nevertheless till half-way with the Steam Controller, by mapping keyboard presses using the flexible controller configuration. It worked perfectly. After Valve released Proton beta 3.16-4 AND the new Steam Client beta (both are necessary apparently) controllers worked as expected (Xbox 360 controller included) and I finished the game using this beta version. On top of that, the game works absolutely perfectly on several configurations I tried (Solus, Xeon, GTX1060 Nvidia driver 410.x and Ubuntu 16.04, i5, GTX970 Nvidia driver 396.54) and remains always at 60 FPS. No glitches. No freezes. It’s completely indistinguishable from a native game. So it’s probably a safe bet to go ahead and purchase it if you are interested. Note that PlayDead hinted at some point that they would target other platforms beyond Windows, but if they ever read this: Guys, don’t bother. You don’t need to make a port anymore. That’s how good Proton is.