Recently I was in the business of replacing one of my machines at home (all running Linux by the way), and while I had initially considered simply replacing parts at first, I became aware through various channels of the availability of good and cheap HP workstations on the market these days. The HP Z400 line, used mainly by some corporations for various purposes (design, video edition, rendering, etc…) is progressively being replaced by newer models and there’s now a bunch of them available for very, very reasonable prices in about every major location. No surprise since HP is one of the worldwide PC leading manufacturers, pushing high volumes in many markets. 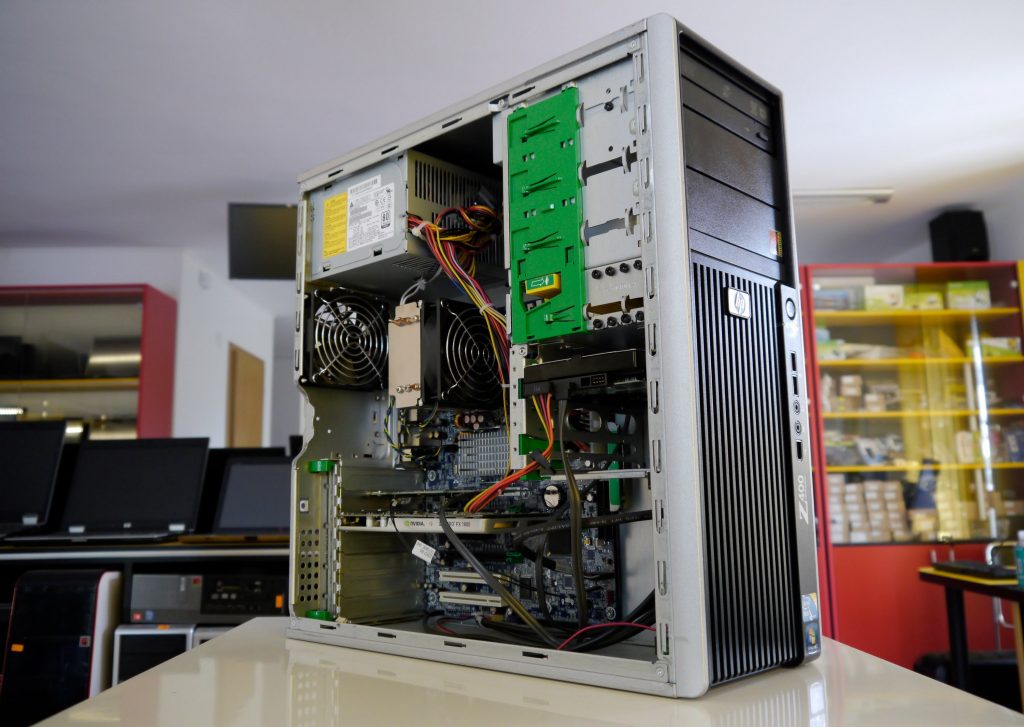 So, what do you get with a HP Z400 that’s worth considering? Well, there are a bunch of different configurations out there for sale, but what’s basically not changing is the following:

The Xeon part was the most attractive piece of hardware when I started looking at HP Z400. Xeons are not consumer grade chips, they are their corporate equivalents. They come with at least 4 cores and have a lot more cache than their i- little brothers. And more importantly, they are also capable of hyper-threading. All in all, for an i7 of the same generation as a Xeon, you’ll be faster in single core operations and significantly faster in parallel ones. 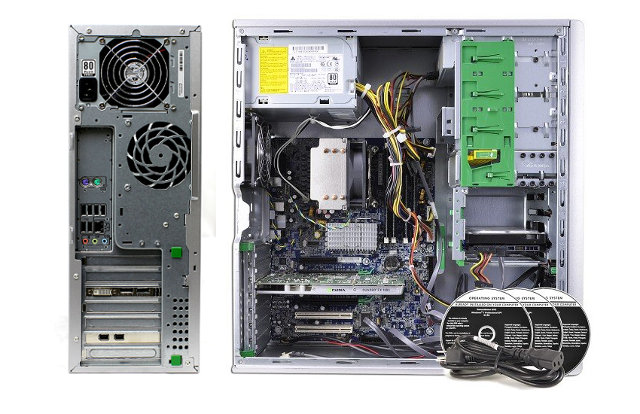 Of course, there are still some advantages to the i7:

Overall the more recent i7 is faster in single core performance, but we are talking about something like 20~30% difference. In multicore benchmarks they are not that far from each other all things considered.

But the most important thing is the cost. Such an i7 costs more than 300 dollars for the processor alone, while you can get for this kind of price the whole HP Z400 workstation with tons of RAM. Mine came with 24 GB equipped and that alone made it almost “free” to purchase considering the cost of RAM these days. It’s not the latest generation of RAM (HP Z400 only supports DDR3-1333), but it will do the job nicely anyway.

My HP Z400 workstation came with liquid CPU cooling – making for a very silent workstation even under 100% CPU load. Much better than the default Intel fan I had up until now in my previous desktop. 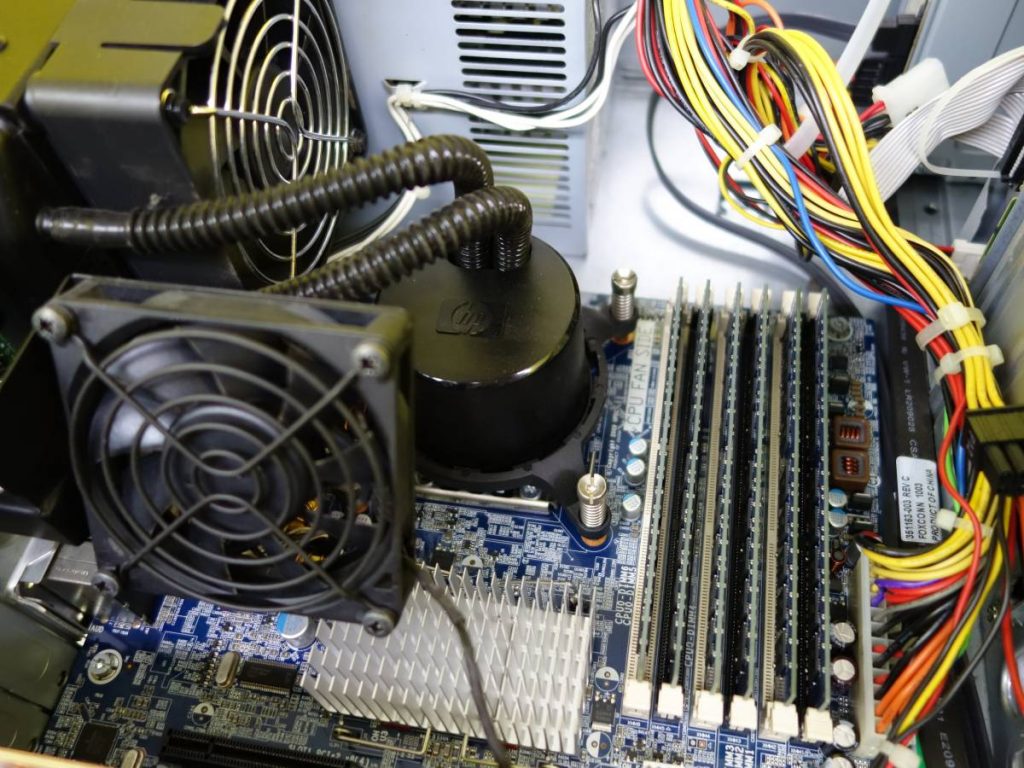 So let’s say you can get the whole HP Z400 workstation with a W3690 Xeon at around 300 USD or less. You can add to it a cheap graphics card, such as the GTX1050Ti for 150 dollars (new), while I opted for a GTX1060 3GB, that you can get for 199 dollars new – the difference of 50 dollars is totally worth it in this particular case. The PSU of the HP Z400 (rated 485W) only comes with a 6pin connector to supply power to the GPU, so it’s highly recommended you go for the Pascal generation of cards which have low consumption. For storage, you can throw in a 50$ 7200 rpm 1TB hard drive for good measure.

It’s very likely you’ll be able to fun any modern game at 60 fps in medium/high settings, if not better (based on the performance of each game in the first place).

All in all, a very good option for gamers thinking about renewing their gaming configuration without spending too much. It’s definitely cheaper than buying a new motherboard, a new CPU, change your RAM type in the process… and it makes for a great desktop experience as well, with the Xeon really making a huge difference in any parallel work, such as compression/encoding tasks. HP’s tower is very well designed as well, no screws are needed to insert or remove parts (latches replace them) and since it’s a custom tower it’s slightly narrower than a typical ATX one.

Expect to get more benchmarks on this Xeon/GTX1060 combination from now on.

I really wonder how much faster I.e. more fps I could get when upgrading to a w3690.

Do you own any game with a benchmark mode? If i have it too we can compare our results so you can know.

I have a couple of games like gta5 and hl2tlc as well as some synthetic benchmark tools like unigine superposition and cinebench. Would you like to exchange email addresses?

Sure, sorry for the late reply. I will contact you shortly.

I just came across 2 of these for free today. I may have to consider using one of them…

What kind of config?

Pretty sweet config. You can replace the Xeon for the W3690 for almost nothing and you get a 6-core (12-cores with hyperthreading) that will be very good at many tasks…

Good to know! I’ll have to check on getting one!

Those are a little expensive, you can probably find them for half the price if you look for it somewhere else… 🙂

I came across one Z400-W3680/12GB RAM/256GB SSD. Although here in Europe these surplus WS’s are not as cheap as in the US (and definitely NOT for free, unfortunately!) the price is still very competitive compared to a new home-brew of equal performance. And you’ve just confirmed that Z400 will make a good upgradable base for a gaming PC.
Thanks for sharing your experience with us!

You are most welcome! Welcome to the Xeon club 🙂

Look for W3680 or W3690 hexacore Xeons as these have unlocked multipliers and can be easily overclocked with Intel XTU, Throttlestop, etc. These come with AIO coolers & won’t need aftermarket coolers for 4GHz OC.

Tһis is a powerhouse! CPUs? We are right here to aid!

Do you have CPUs for sale?

£250 for the X5690 is WAY too expensive! For these money you can buy the whole workstation, with RAM, HDD/SSD and WITH THIS very processor.

Nice 🙂 Apart from the Xeon difference, is it similar to the Z400 in terms of internals?

I’ve yet to find a game where my hardware is the bottleneck. Sure, the CPU is holding some games, like the Witcher 3, back a little.
But as long as I can turn every setting up to Ultra and enjoy more than 30fps I’m content.

Plowing through Doom 2016 at the moment and having a blast.

hEY BOSS HOW DID YOU MANAGE TO GET THE 1080 TO WORK AM SETTING UP MINE WITH A 11GB 1080 TI. AM GONNA HAVE TO PURCHASE A NEW PSU AND A GAMING CASING

Yes you will need a new PSU, because the 1080’s consumption requires more power than the default PSU can provide.

Hey I have a similar setup and had to order a specific HP upgrade for the PSU (600w) from ali-express to get it to work with my 1080. It works great now, even 4k gaming, but a message on boot up mentiones it needs a front-fan upgrade … which you need to press f1 to bypass it. After some searching it looks like you can get it on amazon, but by the time it gets down to me in New Zealand the cost is approaching $100. So I was wondering did you come across this problem? Is the a round-… Read more »

In my case I did not need a larger PSU (I purchased a GPU that was low-power), so I am not sure whether buying an extra fan will remove the message.

I got myself a really big (I think 120mm) fan and used tie wraps and some isolation foam to attach it to the bottom of the hard drive bay, so now it blows gently towards my gpu while sucking in fresh air..
Work great for me.
Whatever you decide, make sure you have a 4 pin fan…

Hey Ben,
I ended up also having to spring for the bigger PSU.
The machine ended up crashing in Nier Automata and Dragon Quest 11, turned our the original 485W PSU just wasn’t up to the task.

I upgraded to the 600W version and indeed, I’m getting the same prompt concerning the front-fan not working.

Hitting F1 isn’t a big issue for me, but I wonder about the long-term consequences..maybe I’ll have to get the front-fan assembly you’ve linked to on Amazon.

You don’t need to get the expensive front fan assembly, which is not available anyway! Just buy the original 92mm HP fan from ebay for 6 dollars and secure it with zip ties to the front intake. You also need to buy a rubber mount for the fan ‘cos I noticed after attaching it that it doesn’t run as it gets stuck on a piece of iron on the case…

We had very similar in our previous company, it worked well, but due to some issues with the stable work – the motherboard had a malfunction – needed to change the computer to AMD server. Im sure it can be used for games but only if you get for free, buying it is like going back to ancien times. After all, its dead technology.

You can pair a low-power GPU like the GTX1060 with it. For the CPU please double check but I believe you can easily get the w3690 which should have more cores and a higher frequency too (again, please double-check).

About the CPU, it is not available in my country, and the GPU is too expensive, sorry. 😢